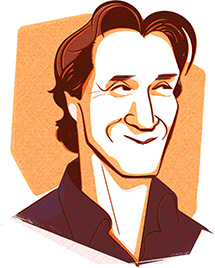 Bachleda and his team have also won additional awards from the Society of Publication Designers, American Photography, American Illustration, Print magazine, and Communication Arts, among others. He has taught at the School of Visual Arts and has chaired and juried numerous design, photography, and illustration competitions. He has served as president of the Society of Publication Designers (SPD) and was on its board of directors for five years. He most recently served as the cochair for the 50th annual SPD design competition and awards gala. 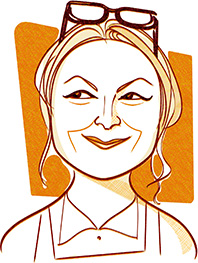 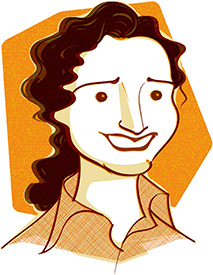 Ayse Birsel is the Co-founder and Creative Director of, Birsel + Seck, the award-winning design and innovation studio working with Herman Miller, GE, Nissan, Tiffany & Co., Colgate-Palmolive and Philips, among others. The Turkey-born, New York-based designer is the creator of Design the Life You Love, a book and coursework that teaches non-designers how to create a meaningful life using her design process, Deconstruction:Reconstruction™ (DE:RE™), and its tools.

Born in Izmir, Turkey, Ayse came to the US in 1986 to attend Pratt Institute in Brooklyn, NY on a Fulbright Scholarship. Since then she has called New York her home, living there with her husband and partner, Bibi Seck, and their three children, who continue to inspire her life’s design.

Ayse was identified by Fast Company as one of the world’s most creative people and is on the Thinkers50 Radar List of the 30 management thinkers most likely to shape the future of organizations. She is the recipient of numerous awards including the 2001 Young Designers Award from the Brooklyn Museum of Art and the Athena Award for Excellence in Furniture Design from Rhode Island School of Design. Her work can be found in the permanent collections of the Museum of Modern Art, Cooper Hewitt National Design Museum and Philadelphia Museum of Art. 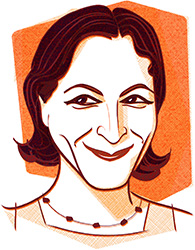 Roshi Givechi is a partner and executive design director at Ideo, currently based in New York. Having spent significant time rooted at Ideo locations across the U.S. and Asia, Givechi channels her global exposure toward amplifying creativity and culture firmwide. As a communication and interaction design hybrid, Givechi finds inspiration in choreography—rooted in the coalescing of many parts that come together to make a greater whole—and applies this lens to her work in designing cities, services, and stories. 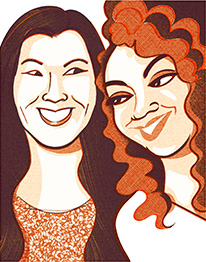 Marah Lidey is the cofounder of Shine, the company that makes well-being more accessible. Her expertise lies at the intersection of millennials and messaging; Lidey previously directed mobile and social teams for brands like DoSomething.org, American Express, and Viacom. Lidey secured her BA in journalism from Grady College at the University of Georgia and currently resides in Brooklyn. A World Economic Forum Global Shaper, and named one of the top 35 People to Watch in NYC Tech by Built in NYC, Lidey also actively advocates for increasing racial and socioeconomic diversity in technology and entrepreneurship.

Naomi Hirabayashi is the cofounder of Shine, the company that makes well-being more accessible. Prior to Shine, Hirabayashi was the chief marketing officer at DoSomething.org. Named one of the top 35 People to Watch in NYC Tech by Built in NYC, Hirabayashi is also a DMN’s 40 under 40 honoree, and a Take Part Revisionary nominee. Hirabayashi lives in Brooklyn with her husband, is passionate about diversifying entrepreneurship and leveraging technology for impact, and believes Brené Brown is a queen. 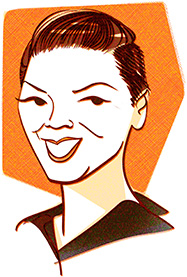 Kat Holmes is the founder of Kata, a company that helps leaders build equitable digital experiences. She is best known for her leadership in reexamining disability and diversity as a source of innovation. Previously, as director of inclusive design at Microsoft, she led a team of designers, strategists, and researchers to improve the inclusivity of products like Windows, Cortana, Xbox, and Office. She currently works with teams across the industry on recognizing who’s excluded from using their products and redesigning solutions with the close participation of people who have a range of abilities and disabilities.

Holmes led the development of the award-winning Microsoft Inclusive Design toolkit, described in the February 2016 issue of Fast Company as a "radical" evolution of design thinking and practices. Her documentary Inclusive examines the future of inclusive design for digital technology. Her two-part series Captivated by Her, which explores how human emotion can stimulate new interactions with technology, was inspired by the Spike Jonze film Her and created in partnership with Vice Media and Warner Brothers. 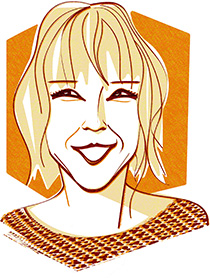 Claire Keane is a childrenʼs book author-illustrator who worked as a visual development artist at Walt Disney Animation Studios for 10 years, where she made significant contributions to hits such as Tangled and Frozen before pursuing a career in childrenʼs books. She also currently serves as visual development artist on Disney Channel's "Tangled: The Series." Her father, Glen Keane, is a renowned Disney animator and her grandfather, Bil Keane, was the creator of The Family Circus comics. Keane is the author of Once Upon a Cloud and Little Big Girl and the illustrator of Love Is and A Fairy Friend. You can find her documenting moments in her sketchbook around her neighborhood of Venice Beach, California. To see more of her work, visit claireonacloud.com 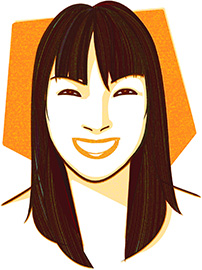 Marie Kondo is the No. 1 New York Times best-selling author of Spark Joy and The Life-Changing Magic of Tidying Up (also a best seller in Japan, Germany, and the U.K.) and was named one of Time magazine’s 100 Most Influential People of 2015. She is the founder of the KonMari Method. Her newest book, The Life-Changing Manga of Tidying Up, is due out in July. 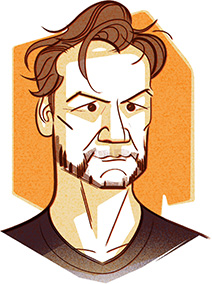 As vice chairman, global chief creative officer, Nick Law guides R/GA’s strategic and creative vision. He partners with the agency’s senior clients to ensure that R/GA’s wide range of capabilities—business consulting, product and service design, and communications—are equally grounded in creativity, strategy, and technology. Law leads an increasingly diverse group of creatives including designers, copywriters, interaction designers, and creative technologists. From these disciplines, he curates and choreographs teams that collaborate on a variety of work, from mobile applications to TV spots and everything in between.

Since joining R/GA in 2001, Law has worked with clients such as Nike, Beats by Dre, Samsung, HBO, Johnson & Johnson, IBM, and Google. During his tenure, R/GA has become one of the most awarded agencies in the world, winning every major creative accolade, including four Cannes Lions Grand Prix awards, a D&AD Black Pencil, and a Grandy; and Adweek named R/GA Digital Agency of the Decade and Nike+ as Campaign of the Decade. For more than a decade, Law has led the development of many of R/GA’s most innovative projects, including Nike+ Running, Nike+ FuelBand, and Beats Music for Beats by Dre. He has also sponsored the creation of cutting-edge R/GA capabilities such as the Prototype Studio and the hugely successful R/GA Accelerator.

Law has been on every major awards-show jury (including being named Jury President for the Cannes Innovation Lions) and has twice been named in the Creativity 50, a list of the world’s most influential creative people. He is recognized as an industry thought leader and has been published globally. Beginning his career as a designer in Sydney, Law continued as an advertising art director in London and transitioned to digital in the late ’90s after moving to New York. His range of experience across marketing disciplines and geographies is an important asset for R/GA as the agency broadens its offerings and opens offices all over the world. 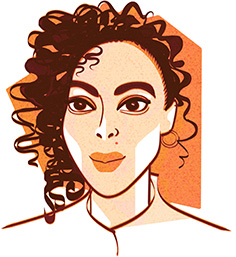 Below the surface of Shantell Martin’s characteristic black-and-white compositions is an artist’s inquiry into the role of artist and viewer. In Martin’s world, a work of art is inseparable from its creator and its audience, and art is more than an object of admiration disconnected from the process of its inception. Rather, she sees her work as a vehicle to forge new connections between education, design, philosophy, and technology—the glue in an increasingly interdisciplinary world. Martin’s methodical practice of bringing her audience and surroundings into her drawings is her own reflection on ever-changing time and space. Her work is imbued with a sense of duty; the call of an artist to make the connections often invisible to those working within their respective areas of expertise.

Martin’s work with institutions such as the MIT Media Lab, Autodesk, and New York University’s Tisch School of the Arts denote her ongoing inquiry into new models and technologies that are transforming the way art is made and consumed. Eschewing traditional art-world norms, Martin’s work purposefully bridges fine art, performance art, technology, and commercial work. Her artwork has appeared in the Brooklyn Museum, the Museum of Contemporary African Diasporan Arts, and the Bata Shoe Museum. She is preparing for a 2017 solo show at the prestigious Albright-Knox Art Gallery in Buffalo. 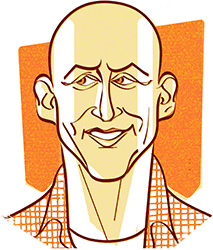 Andy Puddicombe is a meditation and mindfulness expert. An accomplished presenter and writer, Puddicombe is the voice of all things Headspace. In his early twenties, midway through a university degree in sports science, Puddicombe made the unexpected decision to travel to the Himalayas to study meditation instead. It was the beginning of a 10-year journey that took him around the world, culminating with ordination as a Tibetan Buddhist monk in Northern India. His transition back to lay life in 2004 was no less extraordinary. Training briefly at the Moscow State Circus, he returned to London where he completed a degree in circus arts with the Conservatoire of Dance and Drama, while drawing up the early plans for what was later to become Headspace. 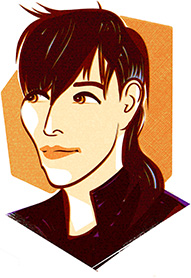 Vivian is the founder of Snaps, the first enterprise platform for brands in mobile messaging. Snaps’ platform powers chatbots, iMessage stickers packs and emoji keyboards for many of the top Fortune 500 companies like L’Oréal USA, Bud Light, Marriott Rewards and Burger King. 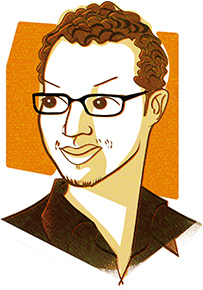 Luis von Ahn is an associate professor of computer science at Carnegie Mellon University, and he&rsquos at the forefront of the crowdsourcing craze. His work takes advantage of the ever-growing web-connected population to achieve collaboration in unprecedented numbers. His projects aim to leverage the crowd for human good. His company reCAPTCHA, sold to Google in 2009, digitizes human knowledge (books), one word at a time. His new project is Duolingo, which aims to get 100 million people translating the web in every major language. 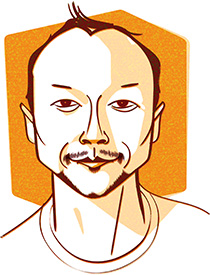 Robert Wong is an American graphic designer best known for his work as design chief of Starbucks and cofounder/VP of Google Creative Lab. He has been honored as a Master of Design by Fast Company and one of the 50 most influential designers in America. He is an elected member of Alliance Graphique Internationale and on the board of directors of the One Club. His work has been shown at exhibitions around the world including the Cooper-Hewitt National Design Museum and the Museum of Modern Art (MoMA).